I think I'll do an empties post every three to four months now, because I don't really use up that much in a month. So, here is what I've emptied up since July... 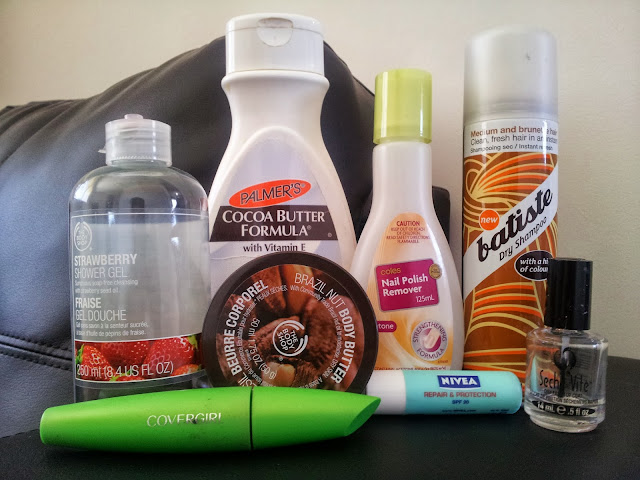 The Body Shop shower gel
It smells nice, but I don't think its anything special. This is my second or third bottle of this particular shower gel and I'm really over the smell so I'm not repurchasing. I'm using a Palmolive body wash at the moment which I like loads more actually.

Covergirl mascara
This was really hyped up a few months ago. While it was a good mascara and lived up to its no clump claim, it fell short of what I want in a mascara. This one does lengthen lashes, but I like length AND volume/thickness. I prefer Rimmel mascaras, they are cheaper and for me, they do a good job.

The Body Shop body butter
Oh my gosh I was so sad when I ran out of this. It smells SO good, like a delicious cocoa-chocolate treat and it was such a creamy, smooth formula. I will repurchase this when I have used up a few more of my body moisturisers because I'm starting to have storage issues!!

Palmers Cocoa Butter lotion
I did like this, but the tub version is better because its more concentrated and richer. Also, with the tub you can get more out of it, theres still a bit of product left inside but I can't get it out! As with all Palmer's lotions, this smells nice (very chocolate-y) and is very moisturising. No, I'm not repurchasing, but only because I want the tub. Does the tub version still exist? I've gone to two different Big W's and haven't spotted it :( anyways, as I said above, I need to finish a few other moisturisers first.

Nivea lip balm
I LOVE Nivea lip balms, I have soo many of them all over the place. This one was not very good throughout winter because its a lot harder and waxier than the other lip balms. That being said, in the warmer weather, it was really good and I did like the mild vanilla scent it had to it. I ended up scraping out the balm left in the middle that wouldn't roll up and that lasted me quite a while. I don't think I'll repurchase just yet because I've got a million lip balms already, but maybe later on.

Batiste dry shampoo
Ahh good ol' dry shampoo. This one smells so good, like chocolate! I like this one because its a coloured powder so it doesn't make me look like I have the hair of an 80 year old. I plan to repurchase this when I've run out of the Cherry version of this that I've been using lately.

Seche Vite
If you follow me on Instagram, you'll know that I'm quite the polish addict. Of course I've already repurchased this!! I don't think I will ever not buy this (err, double negative...you get what I mean!).

So that concludes my quarterly empties. What have you used up this month, lovelies?