I hope you've all had a great month :) mine has been pretty good!

Now on to the empties... 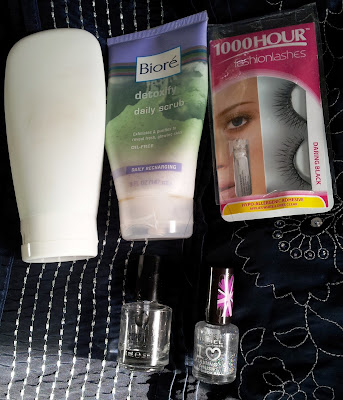 What is that phantom bottle on the left, you say? It's a product that I trialled for beauty heaven in a secret trial where we didn't know what the product was until the trial ended. It's actually Clearasil Vitamins & Extract wash mask
Biore daily facial scrub
1000 hour lashes in Daring Black
Seche Vite Dry Fast Top Coat
Rimmel I Love Lasting Finish in Disco Ball

Clearasil Vitamins & Extract Wash Mask (see more at http://www.clearasil.co.uk/vitamins-and-extracts-wash-mask)
I'm not even sure if this has been released in Australia, or if it ever will be. Either way, I liked it. It smelt nice and did a good job of cleansing/removing makeup without being too harsh on my skin. I'd probably repurchase it in the future, but I have a lot of skincare to get through first.

Biore daily facial scrub
It's not empty, but I don't like it anymore. It smells weird, it's a bit too harsh and it doesn't do much for my skin. Not repurchasing.

1000 hour lashes
I loved these! I got so many compliments whenever I wore them. But I've had them for over 6 months so its time to chuck them. I may repurchase in the future, but I've just ordered a few Ardell lashes from ebay so I'm pretty excited about receiving those :)

Rimmel Disco Ball
I'm not happy about this at all...a few months ago, this polish was fine. The other day, I went to use it and realised there was only half left in the bottle and the rest was all dried up. I have no idea why, but it's unusable. I've only had this polish since late last year, and the lid was screwed on tightly. I don't want to repurchase because if this happens again, then it's simply a waste of money. 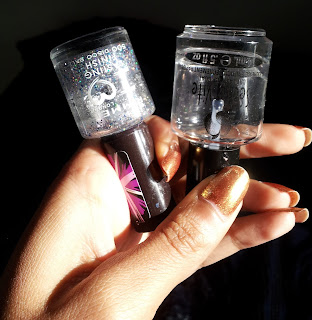 Why do you do this to me?! I've turned the bottles upside down and they're so thick they don't even move. Sigh.

What have you used up this month?
Posted by Sarah at 16:43