I held off writing a May empties post last month, because I didn't feel I used up enough things. So I'm going to do a combined empties post. Where is time going? I feel like the last two months have sped by in the blink of an eye... 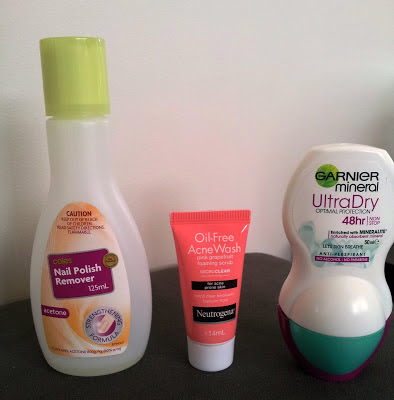 Coles nail polish remover
This appears every 2-3 months in my empties so I haven't got much more to say about it, just that it's still the cheapest I can find and does the job. Repurchased.

Neutrogena grapefruit scrub
I really liked this scrub. It's a pale pink gel scrub with small grains in it (not too abrasive) that cleanse the skin really well. It smells quite nice too. This sample lasted me about 3 weeks, using it once a day. I think I will consider purchasing this when I have exhausted all of my current skin care.

Garnier Ultra Dry Roll On
This particular version of their mineral deodorants is awful. It smells powdery and leaves a powdery residue behind. It probably does last 48 hours but I had to wash it off as soon as I was home/not busy because it smelt weird and the powder made me itch. I was only able to use half of this up because I disliked it too much. I won't repurchase this particular type, but their other ones are good. 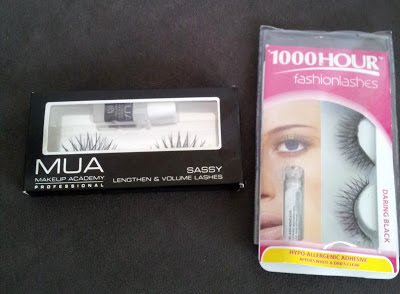 MUA False Lashes
These were very fake indeed, they felt like plastic and were not comfortable to wear either. I think maybe because I purchased the super long ones is why they felt so annoying. The glue was pretty standard, did the job. I have only worn these twice, both times to costume parties and after seeing the photos - theres a distinct gap between my real lashes and the falsies :( even though I did apply them properly. They're cheap for a reason I suppose. Will not repurchase.

1000 Hour Lashes
I bought these from Price Attack and have worn them a few times - I always got lots of compliments! Application wasn't the easiest, but they looked amazing - dark and dramatic. Perfect for a night out or special event. The applicator for the glue was quite handy too. As for whether I would repurchase, I'm not sure...I've recently discovered Ardell lashes (helloooo demi wispies) which are 10x easier to apply and look incredible. Plus, they're super cheap too, I bought two pairs off ebay for about $2.50 each. So in summary, no I wouldn't repurchase, but not because they're a bad product. 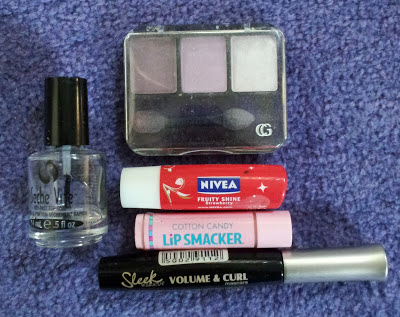 Covergirl eyeshadow
This is many years old, I actually found it when I cleaned out my drawers...yikes. I used to wear this when I was in high school and had no clue how to do makeup. I tend to avoid Covergirl products these days (with the exception of the clump crusher mascara) because they remind me of my clueless younger days!

Nivea lip balm
I am a huge fan of their lip balms. I looove anything strawberry scented so I'd probably buy this one again, once I've used up one of my 1000 other lip balms.

Lip Smacker
A fun reminder of being a kid really. This smells divine and I'd probably repurchase (in a different flavour) if I feel inspired one day.

Sleek Volume & Curl mascara
I've had this for a while now, but probably used it maybe...half a dozen times? It's just not that great, it doesn't do much for my lashes. Not repurchasing.

What products are you chucking out this month?