I used to think that there wasn't much point to primer, surely some concealer could do the same thing? When I caved and bought Too Faced Shadow Insurance (TFSI) I was amazed. My eyeshadows looked brighter and lasted ALL day. This led me to question whether the other highly regarded primer, Urban Decay Primer Potion (UDPP), was of the same quality. 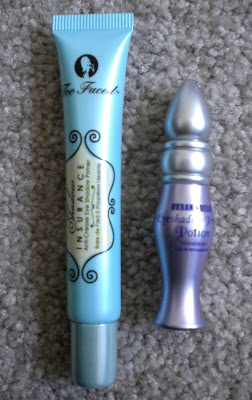 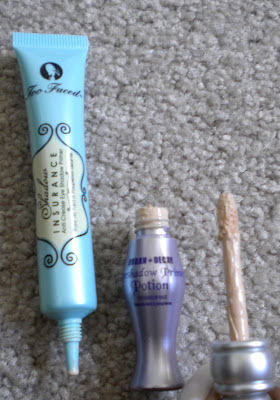 TFSI (left) and UDD (right). I have the mini sized UDPP that came with the Naked palette. The second picture is to show the difference in applicator - TFSI is a squeeze tube with a tip and UDPP is a sponge applicator. Personally, I prefer the applicator tip of TFSI.

I have labelled which eye has which primer. They are roughly the same amount, in the picture it looks like I have less TFSI on but its more of a large blob - UDPP spreads out more. I rubbed the primer in other my eyelid and up to my brow bone.

Here is a quick look I've done using the Naked palette (if you're interested in the colours I used, just ask in the comment box below, thanks!). The reason I'm showing you this is to illustrate that the vibrancy of shadows is the same for both eyes. Also, this will be a comparison photo for the next lot of photos.

I'll give you a quick run down of what I did from the time of application until I took the next photos 8 hours later. Quickly went to the shops to grab a few groceries, made dinner and then went to a friends house for a small get together.

This is how my eyeshadow looks at 11pm, about 8 hours later - still look pretty vibrant right? I've had to use a flash here because of the time.

Hmm...do you see what I see? It may not be that evident but there is definitely a crease on the UDPP lid when you compare it to the other lid!

I can't say that one is better than the other as there are probably a multitude of confounding factors that could have caused the UDPP lid to crease. I prefer TFSI and from these photos, I think it works best for me.

Tell me about your favourite eyeshadow primer!